HealthKit is the most important API when it comes to building health, fitness and workout apps. HealthKit also has many intricacies and details which need introduction when getting started. The data structures encourage precision while having the flexibility to store a variety of values. The way it asks users give app access HealthKit will probably be similar with many iOS developers. HealthKit follows many patterns in other iOS APIs such as Core Location or Core Data. At the same time it uses newer programming techniques and newer technology.

Why I Am Building a Workout App

As an independent software developer, exercise is an important part of my schedule. It keeps me healthy, my mind active, and my body stimulated. In order to make the most of my time, I started looking into High-intensity interval training. High-intensity interval training has many benefits but the main strategy is to switch between breif periods of high levels and low levels for an extended period of time. For instance, I’ve started exercising on the stair stepper for 30 minutes. In that period of time, I’ll alternative the speed on the machine to get my heart rate to fluctuate between 150 and 125 beats per minute - for 15 - 30 seconds each. Right now I use the built-in Workout app on my Apple Watch and check my heart rate throughout my exercise. [caption id="attachment_33" align="alignnone" width="1024"] 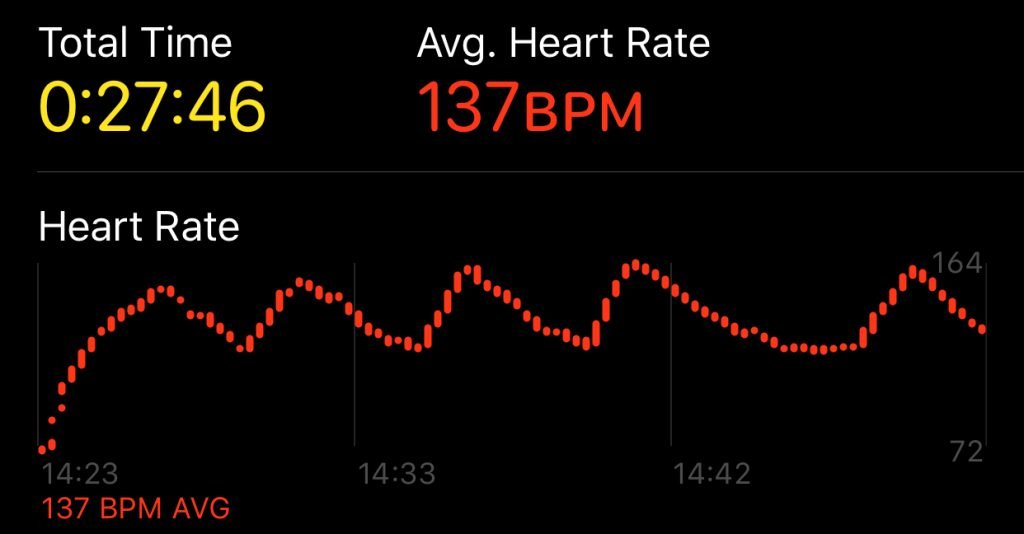 An example of one of my workouts. Notice how fluctuate my heart rate with the intensity of the workout.[/caption] However a custom app which could notify me of when I reach certain heart rates for a period of time would be better. As an Apple Watch owner, who has built his fair share of apps for the Apple Watch since day one, this presents itself as a great opportunity to learn more about HealthKit.

One of the key classes in HealthKit is HKObjectType. HKObjectType is the base class which defines different data types. For instance in the case of heart rate, will be a HKQuantitiyType . To access specific types, call

HKObjectType Hierarchy[/caption] The first thing we are going to use with these types is request permission from the user to read and write to HealthKit.

One thing Apple tries to do their best at is making sure the user gives permission to various APIs. Just as with location info and notifications, the user must allow an app permission in order to access HealthKit. The first thing which needs to be done, is to check if HealthKit is available by calling

HKHealthStore.isHealthDataAvailable(). If HealthKit is unavailable (such as on the IPad), deliver a notice to the user. Next get access to HealthKit via the class, HKHealthStore. Call HKHealthStore() to instantiate an object to use throughout your app. With the

HKHealthStore object, request authorization through the

Set of HKObjectType to read from. [caption id="attachment_42" align="aligncenter" width="505"] 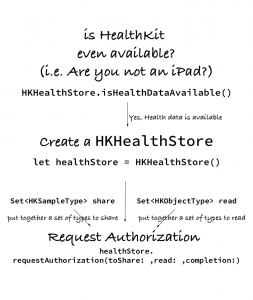 Diagram of Requesting Authorization[/caption] Whenever this method with new HKObjectType or HKSampleType objects (such as the first time the app is run), the permission screen is shown.

requestAuthoriation is an asynchronous method, which means the

completion is called once the request has been completed. The

completion closure is where you'd begin to interact with the user and begin queries for data. Let’s take a look at how to properly with request authorization.

HealthKit is a complex but an easily workable API for building workout and health app.